So after two and a half months in Scotland this winter my time up north finally drew to a close a few days ago. My goal for the winter had been to prepare as much as possible for my BMG Winter test and after all my hard work I’m very pleased to say all went well, and a pass means I am now able to progress to the next stage of training;  alpine ski-touring which begins in just a few weeks.

The test was split over six days and is to establish Trainee BMG members meet the required technical and professional standards required to operate in the Scottish winter environment. We were assessed on climbing ice and mixed routes, our mountaineering judgement and general mountaineering knowledge, and general client care in what turned out to be some tough winter conditions.

The first two days were spent on an expedition around the Cairngorms operating as a team of three all using a single rope, mountaineering axe and carrying kit for a night out in a show-hole. I was paired with fellow Trainee Dave Rudkin along with Dave Hollinger who was assessing. Lots of ground was covered with short-roping and pitching around Coire an t’sneachda before dropping into the  Loch Avon basin and climbing another couloir near the Shelter Stone. The weather and conditions were brilliant and a good, informative day was had by all. We snow-holed on the plateau before our night navigation skills were put to the test.

Fantastic conditions on the first day of the exped. Looking across to Carn Etchachan and the Shelter Stone. Credit: Dave Hollinger BMG 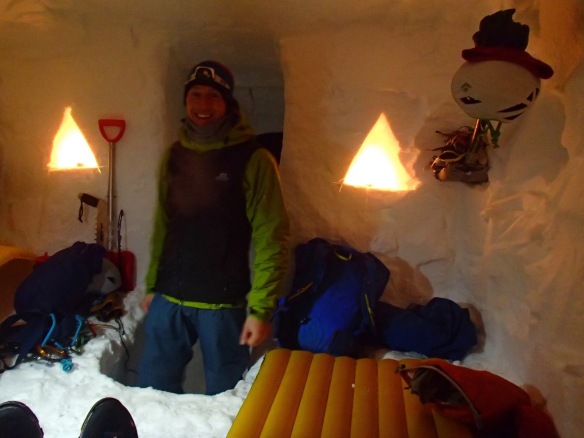 Day two and a big change in the weather saw us head back over towards Coire Lochain where more nav, anchor building / selection and short roping was covered amongst other things. 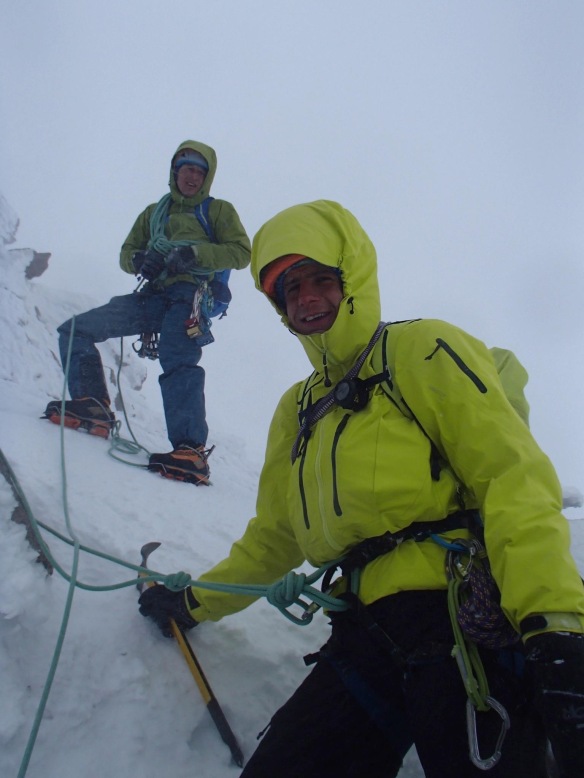 Day three was a personal mixed climbing day based in Coire an t’Sneachda. I was climbing with Graeme Ettle and many topics were covered en-route to climb (his own) ‘The Messenger’. The crag was thawing but conditions were ok and the day went well.

Day four was the allocated personal ice climbing day and we all headed over to Ben Nevis. A 3am start ensured we stayed ahead of the game on the (very!) snowy drive west, but once   there ice conditions were good and plentiful. I was paired with John Crook and Dave Hollinger and we climbed ‘The Curtain’ and ‘Mega Route X’

The Curtain was my route and was a little thin in places whilst getting established onto its lower reaches and also pretty steep for a few moves climbing the top pitch directly.

Myself on The Curtain. Credit: Dave Hollinger BMG

John then led off up a very steep Mega Route X in good style before rapping off and a cautious descent in the as forecast increasingly snowy / windy conditions. 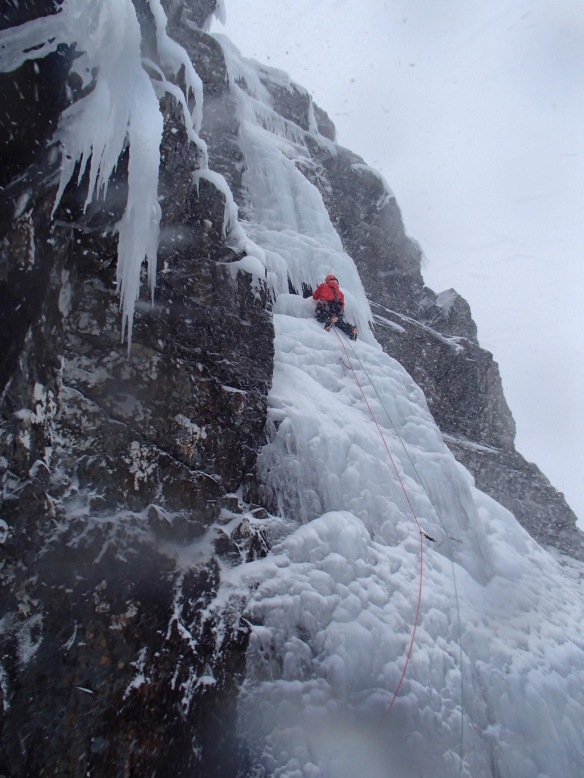 The last two days were the big ones; client days with real members of the public which would test us all in coming up with and carrying out a suitably pitched couple of days for our clients. I was paired with Phil a regular client for past winter Guide tests who turned out to be very capable, keen and good company.

On the first day we climbed ‘Fingers Ridge’ with Jonathan Preston with some snow-pack evaluation towards the end of the day. The weather was once again amazing and we spent time identifying distant peaks when we gained the plateau.

The last day of the test was a continuation from the first client day but with a much deteriorated forecast overnight we this time headed into Lochan to climb ‘Ewen Buttress Direct’, a cheeky little number which turned out as predicted to be in good condition after the recent buildup. Phil enjoyed the route finding it around the right level for him and also something he hadn’t climbed before. We finished with a descent down Fiaciall Ridge and Twin Ribs area.

The results took until late into the evening to be delivered however, a clean pass for all five Trainees means we can now all progress forward in the training scheme. A huge thanks to the assessors and all involved for such a well planned week.

The hangover had barely subsided before myself and fellow Trainee John Crook headed north for 5 days work with Moran Mountain.

I ran a Winter Mountaineer course with three London-based clients and had the now usual recent mix of good / unsettled weather throughout the week.

Days two and three were spent on a traverse of the Forcan Ridge along with a show-hole bivi at the Saddle near the summit. Snow anchors were looked into in more detail along with navigation in the poor weather and snow analysis to stress the importance of being aware of what is under our feet whilst travelling about the hills. 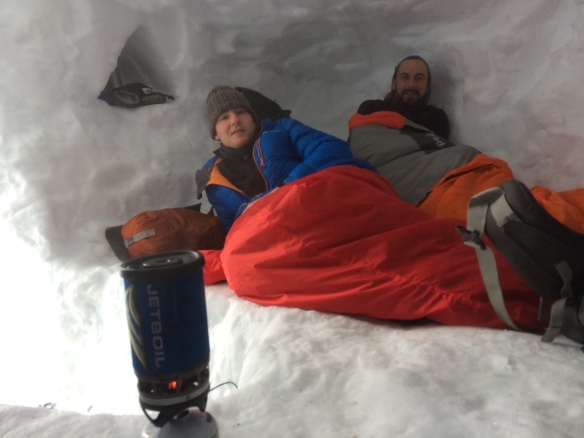 Our snow hole at the Saddle

With the weather back to very good again myself and a couple of clients traversed Liathach main ridge on the fourth day with tricky snow conditions and no track but amazingly calm, alpine-esque conditions. 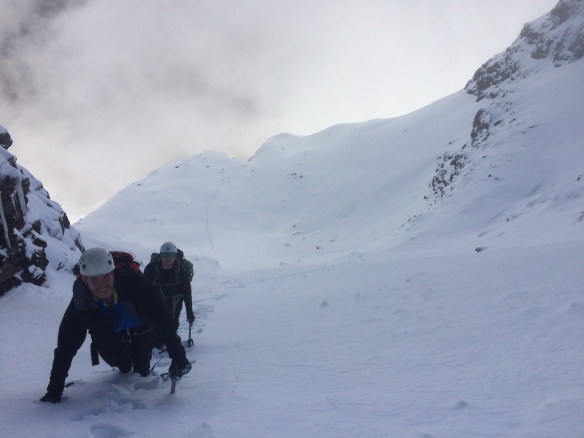 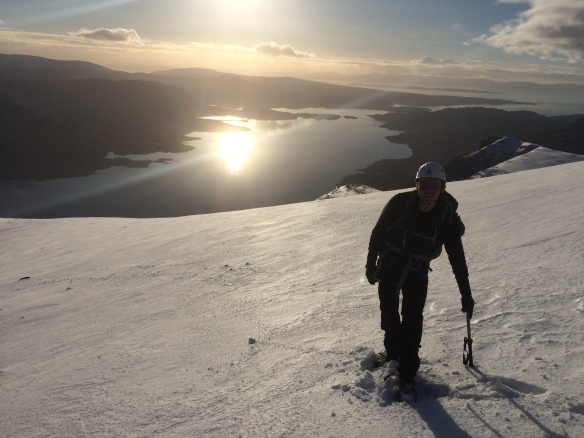 Descending back down towards Torridon

My last day in Scotland was spent at Meall Gorm with the same two clients getting them to take the lead on some easy pitches and a day of looking at the decision making processes that happen on a day out climbing. The weather was once again amazing and my time up north definitely ended on a high.

View out to sea from the summit of Meall Gorm

Thanks to Ed, Dai and Tim for a great week and Martin Moran for the work. It was great to finish with such a good week and great weather. Looking forward to heading back up already!